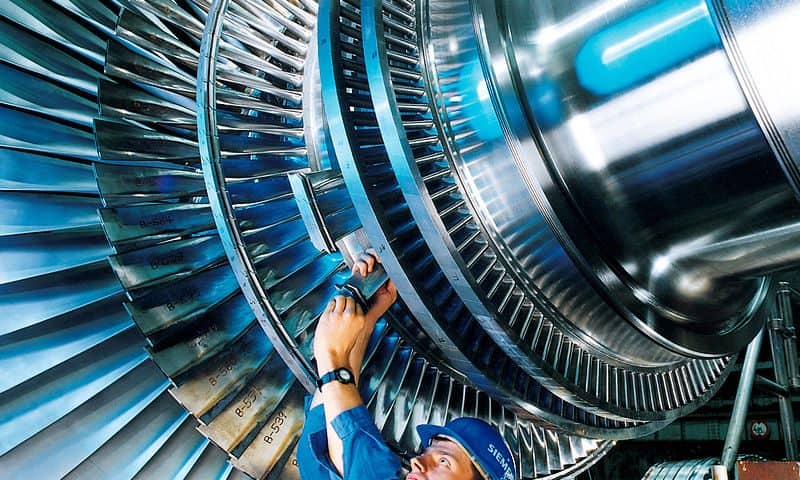 Most of the electricity throughout the United States is produced with the help of steam turbine engines—according to the U.S. Department of Energy, more than 88 percent of the energy in the U.S. is produced through steam turbine generators in central power plants such as solar thermal electric, coal, and nuclear power plants. Offering higher efficiencies and low costs, steam turbines have become an integral part of many American power production industries.

The first modern steam turbine was developed by Sir Charles A. Parsons in 1884. This turbine was used for lighting an exhibition in Newcastle, England and produced merely 7.5 KW of energy. Now, steam turbine generators can produce over 1,000 MW of energy in large-scale power plants. While generation capacity has increased immensely since Parsons, the design has remained the same. But, as intuitive as Parsons’ design is, it isn’t as simple as steam moving across blades. It was based on the Second Law of Thermodynamics and Carnot’s Theorem (), which claims that with greater steam temperature comes greater power plant efficiency. Let’s dive into how steam helps power most of the nation’s power production plants.

How Is So Much Energy Captured From Steam?

Going back to high school physics, water boils at 100°C. At that point, the molecules expand, and we get vaporized water—steam. By harnessing the energy contained in the rapidly expanding molecules, steam provides remarkable efficiency for energy output.

Given the high temperature and pressure of steam, it comes as no surprise that there have been instances where accidents occurred due to poor use or implementation of safety valves. One of the most notable incidents occurred at the Three Mile Island nuclear power plant. The event all came down to a buildup in pressure from steam when the pumps feeding water to the steam generators stopped working.

In simple terms, a steam turbine works by using a heat source (gas, coal, nuclear, solar) to heat water to extremely high temperatures until it is converted into steam. As that steam flows past a turbine’s spinning blades, the steam expands and cools. The potential energy of the steam is thus turned into kinetic energy in the rotating turbine’s blades. Because steam turbines generate rotary motion, they’re particularly suited for driving electrical generators for electrical power generation. The turbines are connected to a generator with an axle, which in turn produces energy via a magnetic field that produces an electric current.

How Do the Turbine’s Blades Work?

A turbine’s blades are designed to control the speed, direction, and pressure of the steam as it passes through the turbine. For large-scale turbines, there are dozens of blades attached to the rotor, typically in different sets. Each set of blades helps to extract energy from the steam while also keeping the pressure at optimal levels.

This multi-stage approach means that the turbine blades are reducing the pressure of the steam by very small increments during each stage. This, in turn, reduces the forces on them and significantly improves the overall output of the turbine.

The Importance of Flexible Controls for Rotating Turbine Machinery

With so much energy passing through steam turbines, there need to be control mechanisms that can regulate their speed, control the flow of steam, and alter the temperature inside the system. Since most steam turbines are in large power plants that require on-demand loads, being able to adjust the flow of steam and overall energy output is a necessity.