What Is the Function of a Hydro Turbine Control System?

What Is the Function of a Hydro Turbine Control System? 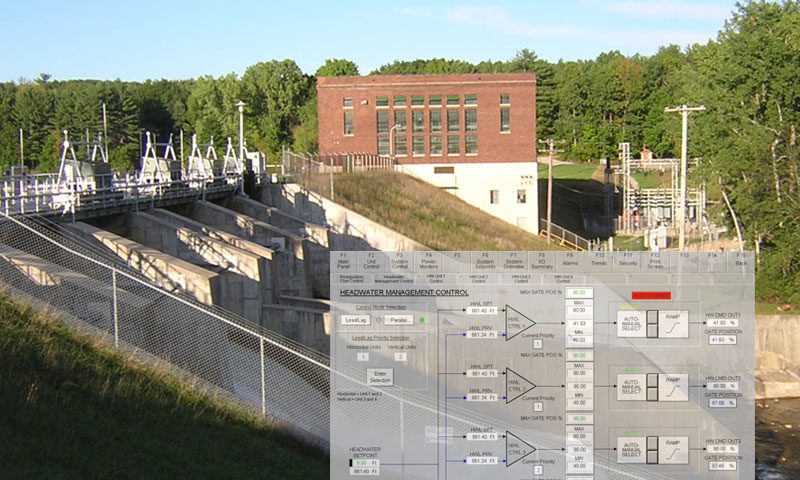 In run-of-river hydroelectric plants, it’s essential that the amount of water flowing in the river is properly controlled by a plant control system by varying the hydro turbine generator output and spill gates. Without this control, backups are bound to ensue, leading to costly inefficiencies and environmental impacts.

The Birth of the Hydroelectric Turbine

The need for more efficient, on-demand hydroelectric power was born out of the textile industry in the late 1800s. Before the invention of mechanical turbines for hydroelectricity, textile mills had used water wheels for hundreds of years. But, these wheels were relatively inefficient, mainly due to the backwater that prevented the wheel from turning. Uriah A. Boyden developed the Boyden turbine while working for the Appleton Company in Lowell, Massachusetts. An improvement upon an outward-flow water turbine developed by French engineer Benoît Fourneyron, his turbine added a conical approach passage for incoming water. In 1848, Bowden worked with engineer James B. Francis to further improve the Boyden design and created the Francis turbine, the first mixed-flow turbine. Francis’ high-efficiency turbines were able, for the first time, to precisely match a site’s water flow and pressure.

How is the flow contained and controlled in a run-of-river hydroelectric plant? In run-of-river systems, the generated electricity depends on the amount of water flowing in the river, hence the name. A portion of the water from the river source is diverted to a reservoir. This water is then delivered, through a pipeline, to the power plant. The water then rotates the hydro turbines inside the power plant, which spins a shaft that is connected to a generator, ultimately producing electricity.

These systems minimize the impact of the natural river flow and return water to the river after it is passed through the turbine. The job of hydroelectric control systems for run-of-river plants lies in monitoring river flow, reservoir level, load, and apply a control strategy that optimizes load generation while minimizing environmental impact downstream by smoothly regulating flow back to the river. Control systems offered by Petrotech allow for maximum on-demand flexibility.

The Future of Hydroelectric Power

Currently, the largest hydroelectric power plant is The Three Gorges Dam in China, capturing 84.7 terawatts per hour annually. According to the U.S. Energy Information Administration (EIA), China is actually the largest producer of hydroelectricity in the world. Other countries are utilizing hydro as well—Norway is Western Europe’s largest producer of both oil and natural gas, but it receives 97 percent of its energy needs from hydropower, according to the same report by the EIA. Given that fossil fuels are finite, hydropower presents an efficient, renewable source of energy for locations that have the right set of necessary parameters, e.g., changes in elevation and a naturally flowing water source.

Work With a Control System Provider Devoted to Efficiency

At Petrotech, we seek efficiency in every aspect of our business model. It’s our goal to make sure your business can increase productivity while eliminating operations waste. Our rotating machinery control systems for hydro turbines and generators help hydroelectric companies worldwide do just that. Whether you’re seeking an upgrade or a new install, we can make sure you have the flexible, open, and integrated control system in place that ensures you meet productivity levels. We’ve installed thousands of systems worldwide. To get started on your project, request a quote with us today.